After surgery, retiree gets back to traveling, exercising 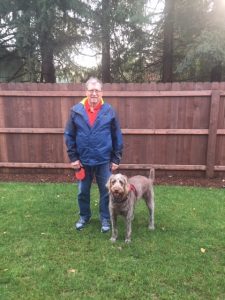 Terry with his dog, Penny.

Terry has always been an energetic person. He worked in construction—an extremely physical job. He ran his first marathon before turning 55 and has been a cyclist for years.

“I’ve led an active or over-active lifestyle. I don’t generally quit at anything,” the now 70-year-old said, adding mischievously, “I always try and outwork my much younger son-in-laws.”

However, about seven years ago, pain started interrupting Terry’s activities. He had to give up running. He started walking crookedly because his back hurt so badly. His left leg and foot started going to sleep intermittently and instantaneously. Standing for long periods was impossible.

Then, thanks to a change in health insurance, he switched doctors and started coming to Vancouver Clinic. Terry’s primary care provider, Arielle Gordon, referred him to Dr. Nelson Saldua, a Vancouver Clinic orthopedic surgeon with specialty training in spine surgery. That referral was the beginning of the end of his pain.

Dr. Saldua immediately ordered an X-ray and an MRI. He told Terry, “I know exactly what the problem is.”

Terry’s L4 and L5 discs were misaligned and pinching his nerves. His nerve cavity was the size of someone’s little finger when it should be the size of a thumb.

Dr. Saldua laid out Terry’s options, which included continuing to see a chiropractor, getting injections, or trying one of three different types of surgeries. After discussing the pros and cons, he suggested Terry take some time to think about it.

“I always liked his choice of words,” Terry said. “He never led me to believe surgery would be 100 percent successful. He said, ‘If this is successful, these are the results we would expect.’”

Dr. Saldua’s honesty, his years of Navy service, and positive testimonials from other patients helped Terry assure himself that surgery was the right choice. He opted for the procedure that carried the most risk but had the greatest long-term success—an anterior lumbar interbody fusion.

“I took a chance, but I had faith in him,” Terry said.

Because the delicate operation involved making an incision below the belly button and accessing the vertebrae from the front, Dr. Saldua worked with another surgeon with expertise in arteries and veins.

“The biggest blood vessel in your body, the aorta, lies just in front of the L4-5 disc,” Dr. Saldua explained. “Dr. John Wiest, a vascular surgeon from St. Vincent’s in Portland, helped move this blood vessel safely out of the way. From there I was able to place the biggest implant, which was necessary to realign the bones.”

The surgery went flawlessly and Terry woke up with no pain. The leg that had been going numb for years was still weak from lack of use, but it no longer hurt.

A mere two months after the operation, Terry and his wife of 50 years traveled to Germany and Italy. They walked four to five miles a day exploring ruins and cathedrals. Previously, a short walk around the block would have caused him to double over in pain. During the holidays, Terry was able to easily get up and down a ladder to take care of the Christmas lights. This summer he has plans to get back on his bicycle and hike around area waterfalls.

Terry said he’s looking forward to spending the next 30 years exercising, taking care of his body, and getting out and enjoying life with his wife.

“Every day it gets better,” he said.