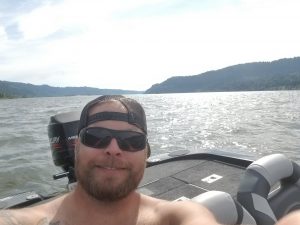 At just 37 years old, Sandy isn’t a typical back surgery patient. But his experience shows that spine problems can debilitate people of every age. Happily, there’s often a solution.

Sandy’s story starts last Thanksgiving. He was driving from Vancouver to Southern Oregon to visit his mom when his right ankle started hurting. The pain grew worse over the course of his visit so when he returned home he went to see a doctor. He was diagnosed with a sprained ankle and told to rest. Six days later, when nothing had changed, another provider suggested an ankle brace and more time with his feet up.

The pain started moving up his leg and in December Sandy referred himself to a specialist. A leg MRI showed that everything was fine—no broken bones, factures, or torn muscles. Sandy didn’t have any answers or a path forward and the pain was getting worse. He tried seeing a chiropractor, going to physical therapy, and buying $1,500 custom arch supports. The next doctor he saw suggested a walking boot, which he hobbled around in for more than two months.

“Nothing was working,” Sandy said. “All the stuff they were having me do made it hurt worse.”

His next call was to Vancouver Clinic. Dr. Jeffrey Brent told Sandy to ditch the boot and ordered a back MRI. The result? Herniated L4 and L5 discs that were pushing against a nerve cluster leading to the right leg. Based on this MRI result, Dr. Brent referred him to his colleague, Dr. Nelson Saldua, an orthopedic surgeon with specialty training in spine surgery. Dr. Saldua recommended surgery and Sandy didn’t hesitate.

“At that point I just wanted to fix it,” Sandy said. “My quality of life was not good.”

Once Sandy had a diagnosis and a surgery date the pain kicked up another notch.

“It was through the roof,” he said. “I was bedridden for two weeks. It felt like someone lit their fist on fire and was punching it up my leg. Pills weren’t even working. It was the lowest point in my life.”

On the day of the surgery he was in so much pain that he was crying as his dad drove him to the hospital. The staff noticed his distress, took him to a room, and helped him calm down and get comfortable. Dr. Saldua completed the surgery in under two hours.

“I felt like $10 million when I woke up,” he said, adding that he kept touching his leg during his recovery. He could hardly believe that it had stopped throbbing.

Sandy’s neighbors checked on him daily throughout his recuperation. They sent over dinner and had their kids help keep his house up. Their kindness and thoughtfulness was a silver lining that made the difficult medical situation bearable.

Today Sandy is back at work, driving gas tankers and delivering fuel to gas stations. He’s still not sure what caused the herniation in the first place. Driving trucks can be bad on the back and his specific job requires maneuvering heavy fuel hoses. On top of that, he did a lot of heavy weight lifting in the past. Now that he’s better he plans to take it easier on his body. He wants to get into yoga and do more camping and fishing.

“I’m ready to have a healthy quality of life,” he said.