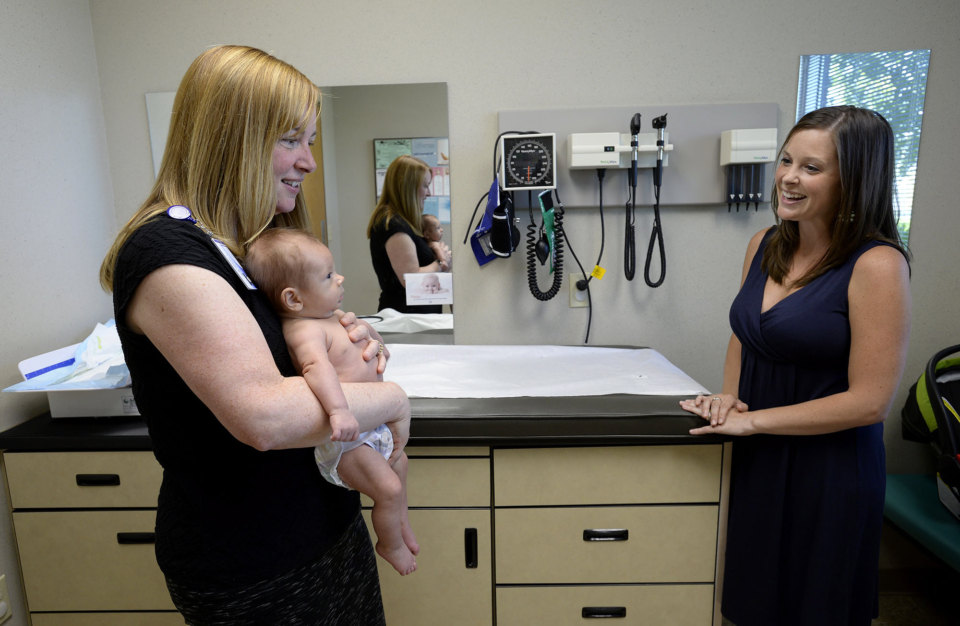 Six months after launching a group prenatal care program, the midwives at The Vancouver Clinic are convinced their patients are receiving a higher level of care than they would with traditional prenatal care.

“We’re believers,” said Lauren Andronici, lead certified nurse midwife at The Vancouver Clinic. “I believe in the future â€¦ this is going to be the way to go, for sure.”

Since launching, 32 women have delivered babies after completing the Centering program. Another 100 women are currently enrolled in the program, Andronici said.

In the first three months, The Vancouver Clinic offered one CenteringPregnancy group per month. After that, they added a second group for each month, and the program still often has waiting lists, Andronici said.

“Enrollment is definitely steady, patients are choosing it,” she said. “I feel like it’s a successful launch six months in.”

CenteringPregnancy is a group prenatal care program used across the country. Centering brings together women with similar due dates for individual health assessments, group education sessions and community building during regular two-hour sessions.

Women who participate have their initial prenatal visit with a midwife or physician, and, after the first trimester, begin the group prenatal care, which is led by a certified nurse midwife and a medical assistant who remain their caregivers throughout the pregnancies. The program comes at no extra cost and involves the women’s partners, who are encouraged to attend the meetings.

“I feel like I’m providing a better quality of care than traditional prenatal care,” Andronici said. “I feel my patients are very well prepared.”

Sarah and Ross MacDonald of Camas were in The Vancouver Clinic’s third Centering group. Sarah delivered their son, River, on June 6 via a natural water birth. That was Sarah’s first pregnancy; Ross has a teenage daughter. But both said the Centering program made them feel prepared for pregnancy, labor and delivery.

“I always learned something,” Sarah MacDonald said of the meetings.

“I feel like it replaced having to go take a lot of those extra classes because we learned so much,” she added.

Sarah MacDonald was one of about a dozen women in her Centering group. The women ranged in age, some were in their early 20s, others in their 30s. Some women were pregnant for the first time, some had other children at home. And some of the women were married, others were not.

The group had two-hour meetings for the first few months and twice-a-month meetings during the last trimester. Andronici and a medical assistant led the MacDonalds’ Centering group.

The meetings began with the women checking and recording their own vitals, such as blood pressure and weight. Then each woman had brief one-on-one meetings with Andronici, who took belly measurements, performed ultrasounds and checked on the baby’s development. Those private meetings also gave women a chance to ask questions they didn’t feel comfortable bringing up in front of the group, Sarah MacDonald said.

“I thought the girls did a great job of being able to talk about what was going on that moment,” Ross MacDonald said. The women were able to discuss things they were all experiencing — things other people, including their partners, may not be able to relate to, he said.

Sarah MacDonald found comfort in that and felt like she was part of a support group.

For Ross MacDonald, the session on water births was the most beneficial. Ross and Sarah had discussed the method and wanted to deliver River via water birth, but the session helped the couple know what to expect and helped Ross understand how to support Sarah during delivery.

The session — and subsequent discussions — about breast-feeding helped Sarah MacDonald feel prepared to try it once River was born. Many first-time moms struggle with breast-feeding, she said.

“I feel like I was successful because of that,” Sarah said.

The Centering sessions also prepared the couple for labor. When Sarah began having contractions a week before River was born, she knew how long to stay at home before going to the hospital. She used techniques she learned in the group to labor at home until signs of active labor began.

“I knew what to expect,” Sarah said.

The women weren’t the only ones who benefited from the preparation.

“A couple guys, you could tell, it eased their minds,” Ross said.

Through the meetings, the MacDonalds got to know and form relationships with the other couples in their Centering group. Because of that, everyone felt comfortable asking questions and sharing personal experiences, they said.

“It was a lot more fun than I thought it would be,” Sarah said.

The Centering group used a private Facebook page to keep in touch between meetings. The page also gave the women a forum to share stories about their deliveries, photos of their new babies and updates about their babies’ development. The women used that group page to plan a get-together now that they’ve all delivered, Sarah said.

“It was such a positive experience,” Sarah said. “I would recommend it to anyone.”