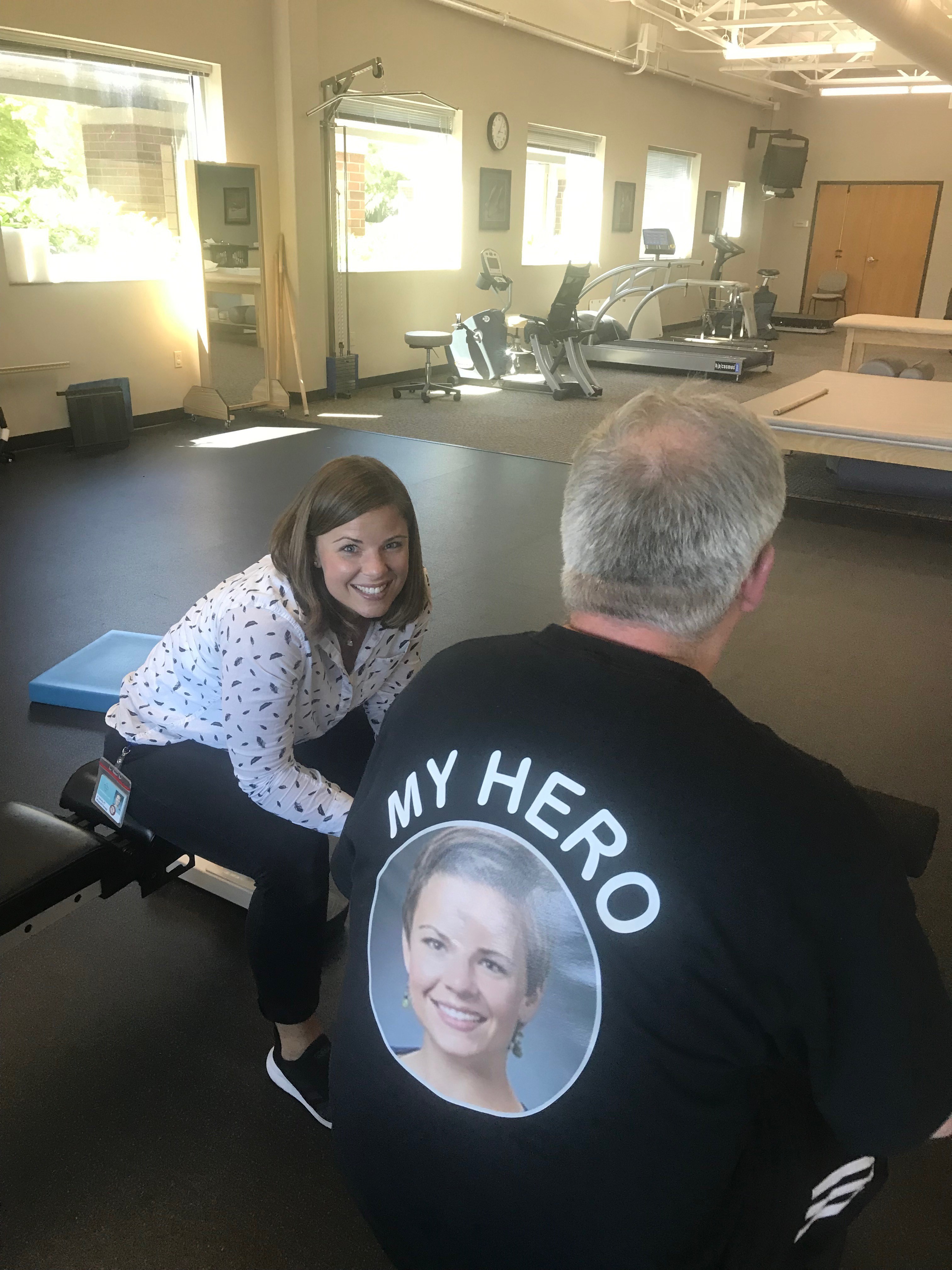 Four years ago Kevin got in a low-speed motorcycle accident going around a corner. His friends like to joke that he was moving so slowly that he tipped over. But the truth is that crashing at 25 miles an hour can do a lot of damage. Kevin broke his ankle, twisted his foot 180 degrees, fractured his fibula, and tore several ligaments and tendons. His lower right leg and foot were a mess.

It took two surgeries for Dr. Casey Cornelius, an orthopedic surgeon at Vancouver Clinic, to put him back together. After Kevin healed, Dr. Cornelius recommended physical therapy. His foot had been though a lot of trauma and Kevin could wiggle it only about a quarter of an inch.

Kevin made an appointment with the clinic’s Physical Therapy Department and was assigned to Katina Salvey, DPT. At his first appointment, Kevin told her that he wanted all his function back. He wanted to be able to golf, hike, and do the things he loves again. Given his injuries it was a lofty goal, but Katina wasn’t fazed.

“My job is to give my patients the best opportunity for a great recovery,” she said. “I love when patients come in determined to succeed. When the work of physical therapy feels overwhelming, I can be the one to believe in them and encourage them toward their goal.”

Katina designed a tough but effective plan. Over the next nine months she helped him work through pain and discomfort. She wouldn’t let him take it easy or feel sorry for himself.

“She tortured me pretty much every time I was there,” Kevin, now 55, said. “That’s part of the process. We joked about it. You have to do what you have to do.”

Kevin pushed himself at home, doing his exercises up to four times a day. With his persistence and determination, and Katina’s expertise, his foot slowly improved. Today, no one would be able to tell that he had been so badly injured.

“Dr. Cornelius did a great job. But there was a lot of damage and he said I would probably limp the rest of my life,” Kevin said. “Because I don’t, I owe that to Katina and the work I put in.”

However Kevin, a safety and risk manager who is aware of the irony of being accident-prone, wasn’t done getting injured. Nearly two years later he took a shot while golfing and felt a pop in his knee. His doctor prescribed physical therapy as a first-line approach. By then Kevin’s loyalties were cemented.

“She’s really good at what she does,” Kevin says. “She knows her stuff and always has a smile on her face. She has a way of putting people at ease and she stays positive. She listens to me talk so it’s not just working. I know she cares about her patients and wants what’s best for us.”

After working together over several years, Kevin and Katina know a lot about each other. She loves soccer. He “tolerates” it. She likes picnics. He’s into skiing. They both appreciate a good joke. Like the time he walked in wearing the same (laundered) workout clothes for the fifth appointment in a row.

Kevin decided that he wasn’t going to let the remark simply slide. Instead he copied her photo from out of his MyChart account. His wife found a t-shirt guy who could blow the image up on the back of a shirt and add the words, “My hero.”

At his next appointment, Kevin walked in and asked, “Is this shirt okay?” Once Katina gave it a thumbs up he turned around. She burst into laughter.

But while the shirt was a prank, the words certainly weren’t. Kevin came close to tears retelling how Katina has helped him recover—again and again.

“I owe her a lot because of what she did for me,” Kevin said.

Kevin and Katina are continuing to work together to help make his knee the best it can be. He recently swung a golf club for the first time since the tear and it felt good. This winter he’s hoping to get in some downhill skiing.

“My wife says I’m going to run out of things for Katina to fix, but I’m sure I’ll be back for something,” he said. “If she ever goes somewhere else I’m following her. I wouldn’t take anybody else.”