Gardening and living again after a successful surgery 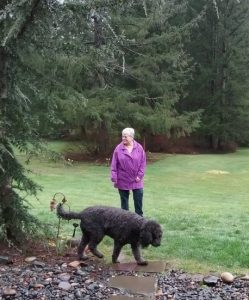 The pain was merely irritating at first—small little muscle spasms in the neck as Thera went about her day. Then the symptoms started drifting down her left arm. The pain became constant and throbbing. Within months, it felt to Thera like someone was trying to rip her arm off or stab it with a knife. The only way she could sleep at night was to sit in a chair and hug a pillow.

“When I met him, he seemed like such a genuine person,” Thera said. “His team, and his nurse, they are very concerned and compassionate people.”

Dr. Saldua diagnosed Thera, then age 68, with pinched nerves in the neck due to disintegrating discs. He suggested that the best relief could be achieved through surgical replacement of those discs.

“I remember him saying, ‘I think I can do great things for you,’” she said.

He was right. In April 2017, Thera met Dr. Saldua at Legacy Salmon Creek Medical Center for the operation.

“There really wasn’t much to it,” she said. “After the surgery I spent the night at the hospital. The relief was immediate. The moment I woke up after the surgery I didn’t have any pain, just a headache. I went home the next day.”

Thera wore a cervical collar for eight weeks, but even then was able to do almost anything she wanted to do.

“It was very much a miracle,” she said. “I had no idea it would be so instantaneous.”

Today, Thera is back to caring for her mother-in-law, who lives with her and her husband, and maintaining their five-acre property in Washougal. The orchard, vegetable garden, and flowers require constant upkeep, and Thera can finally garden without pain.

“Surgery, for the right reasons at the right time, can give people their life back,” Dr. Saldua said. “It’s incredibly rewarding to be able to help Thera and others this way.”