Arthritis patient wants to inspire others to stay positive, active 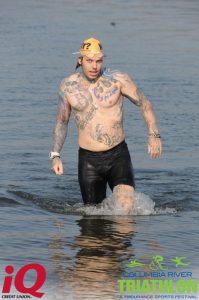 Brandon always has a duathlon or triathlon on his calendar

Brandon first started experiencing the symptoms of ankylosing spondylitis (AS), a rare form of arthritis, when he was 20 years old. He was riding his bike home from a college class when all of a sudden he couldn’t pedal or walk. He was nearly at his place and was able to crawl his way into his apartment. It was weird and scary, but the symptoms went away quickly so he wasn’t particularly worried.

Two years later when he was playing a football game on Thanksgiving something similar happened. He reached to snag the ball, but his arms wouldn’t respond like they were supposed to and his legs felt weak. Later in his 20s, he started having problems with his ribs after he lifted weights or went rock climbing. He’d snowboard and be in pain afterward. He always attributed it to playing too hard.

Brandon also had a highly physical job as a Camas firefighter-paramedic. He thought any soreness he felt after work was the result of lifting a heavy patient or pulling down a ceiling. Brandon coped with the pain and figured that he just needed to go a little easier on his body.

“It was always associated with something,” he explained. “I was doing something active and it would happened. So I just thought I had a weak back. Each time I would say, well I won’t snowboard as hard.”

Eventually the stress and mental trauma of working as a first responder became too much and Brandon trained to become a tattoo artist. He went from being busy and active to sitting for hours on end, gaining weight in the process. The extra pounds were another thing to blame his symptoms on.

But then Brandon decided he wanted to get back into shape. He was also fed up with being unable to participate in sports at the intensity he wanted to. He wanted a long-term solution and decided to see a doctor about it. His physician ordered an MRI, physical therapy, and labs—including an arthritis panel. It was a turning point. His bloodwork came back positive for an arthritis antigen and Brandon was referred to Dr. Esther Hwang, a rheumatologist at Vancouver Clinic.

Dr. Hwang was able to quickly diagnose him with AS, a type of arthritis that primarily affects the spine, causing pain and stiffness. More disconcerting, as it progresses it can also cause vertebrae to fuse together and ribs to fuse to the spine or breastbone. It most often affects men in their teens and 20s. There’s no cure, but the disease can be managed with various drugs. In Brandon’s case, he uses a high dose of an NSAID and Humira, a pricey drug designed for autoimmune diseases.

The diagnosis was a blow. But after absorbing the news Brandon made a decision.

“You can make a choice to be negative and sit on the couch and be angry or you can be positive and do as much as you can,” the 36-year-old said. “One choice is easy and one choice is hard. I wake up each morning and make the hard choice every single day.”

Brandon’s words mask a certain humbleness because every day he gets out of bed he pushes himself to the limit. He doesn’t know what his body will be like at age 45 or 50, so each day is focused on getting in enough movement for a lifetime—as if such a thing were possible.

“My huge worry is my spine fusing together or my ribs fusing together,” he said. “And that’s why I’ve chosen to do the things I do. Someday I might be fused and may not be able to do them.”

Brandon always has a duathlon or triathlon on his calendar, which means that he’s constantly swimming and cycling. He can’t run, but he walks “really fast.” He works out nearly every day and takes a bath and ices his back every single night. AS might make him feel achy, stiff, or tired, but unless he’s sick with the flu, he doesn’t let himself make excuses.

He’s not happy unless he’s working out. And the physical progress he’s made is impressive. In September he’ll be competing in his first half ironman, a race that seemed impossible two years ago. By pushing himself and not giving in, his goal is now in sight.

“Having this disease has changed me and what I think I’m capable of,” he said. “I’m learning to do what I have to do regardless of how I feel. It will slow me down, but it’s not going to stop me.”

Brandon is also fortunate to have the support of his family and a great care team. His father is his cycling partner. His wife understands that exercising gives his life purpose and direction and helps him make time for it while balancing her own job and physician assistant school. Their son, a first grader, knows that taking care of Dad’s back is just part of the family’s routine.

Brandon also depends on his doctors at Vancouver Clinic. When his insurance threatened to stop covering Humira, Dr. Hwang immediately started advocating on his behalf. When he was worried that his suppressed immune system might make swimming in a lake to risky, he called to ask if it was okay. When his stomach hurt he received assurance that it was nothing serious.

“I’m so thankful I have the doctors I do,” Brandon said. “There’s no way I would want to have this and not have good doctors.”

Brandon’s highest hope is that by sharing his journey with AS he can help other people with chronic diseases realize that they can do more than they know. He said he’s learned that choosing to do nothing because of how he feels is “so much worse.” It’s better to make the choice to do what he can, over and over, every day, so that it becomes a habit.

“I’m not unique and there are lots of people out there who are determined,” he said. “I want to show other people what they can do.”