Allergy season off and running early in Clark County 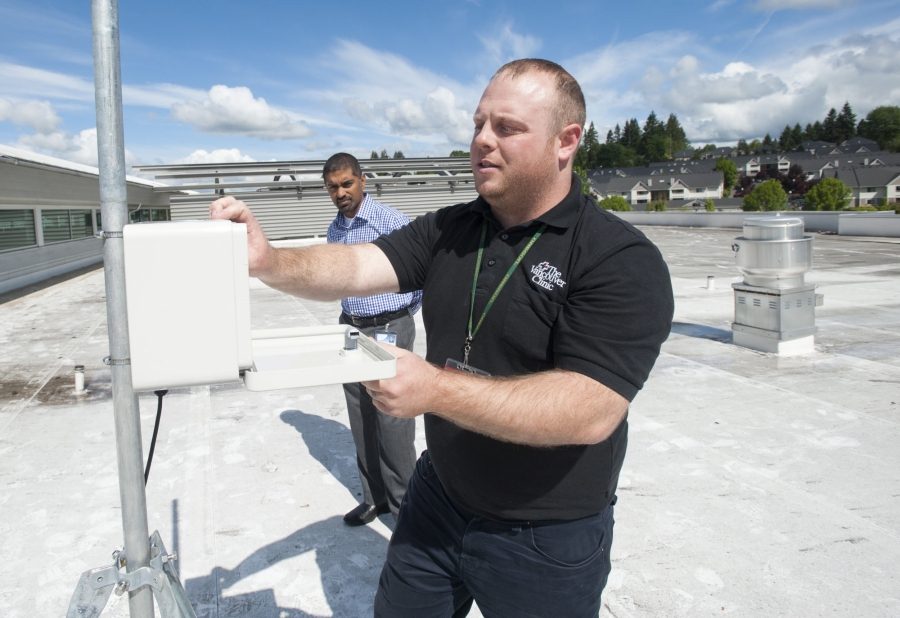 Allergy season is in full swing in Clark County and shows no signs of slowing down soon.

“If people have a history of seasonal allergies, they should adhere to their previous recommendations,” Srinivasan said. “It’s not one of those years where it rains until July, so keep the foot on the pedal with treatment.”

Srinivasan uses a Rotorod machine that sits on the roof of the medical clinic to track pollen levels in the air. The machine’s collection tray has two small rods that flip open as the tray spins. Particles in the air cling to the rods, which are coated with a silicone grease. After 24 hours, Srinivasan identifies and counts the particles using a microscope.

So far, tree pollen has been prevalent, which is to be expected this time of year. The variety of tree pollens, however, caught Srinivasan by surprise.

“This year, I saw a wide variety of trees that I didn’t expect to see,” he said.

That includes sweetgum tree pollen and other trees that are more common in Southern states, Srinivasan said.

“I just didn’t even think they were here,” he said.

Srinivasan is also already seeing grass pollen, which arrived several weeks earlier than in past years.

“Grass pollen is taking off a little earlier than I expected,” he said. “But it doesn’t take a lot of grass pollen to put it up to the ‘moderate’ level. It’s a bad allergen for people.”

Grass pollen usually appears in mid-April, Srinivasan said. This year, however, Srinivasan was seeing grass pollen particles in late March. Srinivasan’s March 29 pollen count showed low levels of grass pollen, but it was up to moderate the following week.

Weed pollen is already appearing, too, Srinivasan said, but in pretty low levels.

“They’ll get going when we get more consistent warm days,” he said. “We just don’t have the weeds lasting as long because we don’t have the humidity.”

But if the weather pattern continues as it has — warm days with intermittent rainy spells — that could mean a longer allergy season, Srinivasan said. Without the rain, the humidity is low enough here that grass and weeds die in the summer. But the rainy days keep plants alive — and pollinating — longer, he said.

And that means, at least for some allergy sufferers, more days of itchy eyes and sneezing.

“Every year somebody is having an awful year,” Srinivasan said.

For the latest reports from The Vancouver Clinic’s Salmon Creek pollen station, visit the American Academy of Allergy, Asthma and Immunology website: www.aaaai.org/nab